In January 1933 there were some 523,000 Jews in Germany, representing less than 1 percent of the country’s total population. The Jewish population was predominantly urban and approximately one-third of German Jews lived in Berlin. The initial response to the Nazi takeover was a substantial wave of emigration (37,000–38,000), much of it to neighboring European countries, France, Belgium, the Netherlands, like Anne Frank and her family, Denmark, Czechoslovakia, and Switzerland). Most of these refugees were later caught by the Nazis after their conquest of western Europe in May 1940. Jews who were politically active were especially likely to emigrate. Other measures that spurred decisions to emigrate in the early years of Nazi rule were the dismissal of Jews from the civil service and the Nazi-sponsored boycott of Jewish-owned stores. 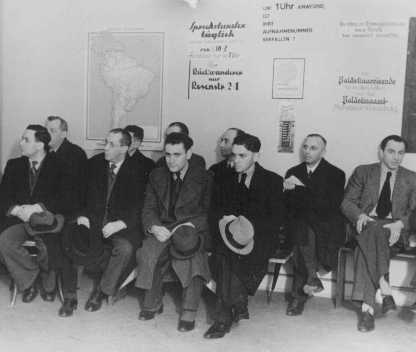 During the next two years there was a decline in the number of emigrants. This trend may partly have been due to the stabilization of the domestic political situation, but was also caused by the strict enforcement of American immigration restrictions as well as the increasing reluctance of European and British Commonwealth countries to accept additional Jewish refugees.

Despite the passage of the Nuremberg in September 1935 and subsequent related ordinances that deprived German Jews of civil rights, Jewish emigration remained more or less constant.

The events of 1938 caused a dramatic increase in Jewish emigration. The German annexation of Austria in March, the increase in personal assaults on Jews during the spring and summer, the nationwide Kristalnacht (“Night of Broken Glass”) pogrom in November, and the subsequent seizure of Jewish-owned property all caused a flood of visa applications. Although finding a destination proved difficult, about 36,000 Jews left Germany and Austria in 1938 and 77,000 in 1939.

The sudden flood of emigrants created a major refugee crisis. President Franklin D. Roosevelt convened a conference in Evian, France, in July 1938. Despite the participation of delegates from 32 countries, including the United States, Great Britain, France, Canada, and Australia, only the Dominican Republic agreed to accept additional refugees. The plight of German-Jewish refugees, persecuted at home and unwanted abroad, is also illustrated by the voyage of the “St Louis”

During 1938–1939, in an program known as the Kindertransport, the United Kingdom admitted 10,000 unaccompanied Jewish children on an emergency basis. 1939 also marked the first time the United States filled its combined German-Austrian quota (which now included annexed Czechoslovakia). However, this limit did not come close to meeting the demand; by the end of June 1939, 309,000 German, Austrian, and Czech Jews had applied for the 27,000 places available under the quota

By September 1939, approximately 282,000 Jews had left Germany and 117,000 from annexed Austria. Of these, some 95,000 emigrated to the United States, 60,000 to Palestine, 40,000 to Great Britain, and about 75,000 to Central and South America, with the largest numbers entering Argentina, Brazil, Chile, and Bolivia. More than 18,000 Jews from the German Reich were also able to find refuge in Shanghai, in Japanese-occupied China.

At the end of 1939, about 202,000 Jews remained in Germany and 57,000 in annexed Austria, many of them elderly. By October 1941, when Jewish emigration was officially forbidden, the number of Jews in Germany had declined to 163,000. The vast majority of those Jews still in Germany were murdered in Nazi camps and ghettos during the Holocaust.

Hitler reoccupies the Rhineland in 1936.

Battle of the Bulge.
Battle of Berlin.