was sent on a mission that required him to use an aircraft. The aircraft  of von der Heydte crashed on the island of Elba and Von der Heydte suffered some severe injuries.

After his recovery, Von der Heydte was given command of the newly formed 6th Fallschirmjäger Regiment

of the 2nd Fallschirmjäger Division

By the time of Operation Overlord, the 6th Fallschirmjäger had been detached as a third regiment to the newly reformed 91. Luftlande Infanterie Division and deployed in the Carentan area of the Cotentin Peninsula. The dispositions of its three battalions on June 6th, 1944 were as follows: 1st battalion advancing towards Sainte Marie Du Mont 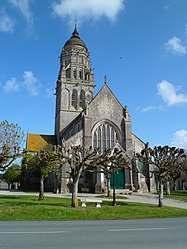 to relieve the strongpoint W5 and reinforce the defense of Utah Beach; 2nd battalion advancing towards Saint Mere Église

On D-Day, about 500 U.S. paratroopers dropped southwest of Carentan. Skirmishing between airborne troops of both sides went on throughout the night. The 1st battalion managed to reach Saint Marie du Mont, only 6 kilometers from strongpoint W5; but finding the town held by the elements of 101 st Airborne Division

the battalion dug in among the hedgerows outside the town. On June 7, after fighting a combined assault of US paratroopers and tanks most of the day, the battalion was destroyed in a fighting withdrawal towards Carentan. About 300 men surrendered. Only 25 reached Carentan. The 2nd battalion found Saint Mere Église held by the 507th Infantry Regiment

of the U.S under Colonel Edson Duncan Raff

to defend Carantan to the last man, since it was the critical junction between Utah Beach and Omaha Beach. Starting around the night of June 10, US troops entered the outskirts of Carentan, and by morning of June 11 fierce fighting went from house to house. To illustrate the intensity: a U.S. battalion (3rd of 502nd PIR) had 700 men entering Carentan and after two days’ fighting only 132 men were left. By dusk on June 11, von der Heydte withdrew what remained of his men out of Carentan to avoid encirclement. The commander of the 17th SS Panzergrenadier Division was furious and wanted to arrest von der Heydte, only intervention from von der Heydte’s higher ranking brethren saved the situation.

A counter-attack on June 12 failed to retake the town. For their battle at Carentan, the German paratroopers earned the nickname “Lions of Carentan” from the U.S. paratroopers. Von der Heydte’s regiment was subsequently involved in the intense hedgerow fighting, also known as the battle of the Bocage

, defending every inch of ground that was characteristic of the Normandy campaign.

On July 22, von der Heydte’s 6th Fallschirmjäger Regiment was mentioned in a Wehrmacht communique when 32 of his men made a daring raid at St. Germain-sur-Seves on an entire American battalion (the 1st battalion of 358th Regiment, US 90th Infantry Division), On August 6, von der Heydte’s regiment participated in Opeartion Lüttich, the disastrous Mortain counterattack attempting to cut off the Allies’ advance at the Avranches bridgehead. The German Seventh Army was subsequently encircled at Falaise Pocket

, the final and epic battle of the Normandy campaign. In September 1944 his regiment was involved in defending the German lines in North Brabant near my hometown Eindhoven against the Allied Forces attacking in the Operation Market Garden.

The Wormhoudt massacre, the mass murder of 80 British and French POWs by Waffen-SS soldiers from the 1st SS Division Leibstandarte SS Adolf Hitler

“The Cross of Honor for the German Mother”

Was Marinus Van der Lubbe responsible for the fire of the Reichstag.
The Doolittle Raid or Tokyo Raid.