In Nazi Germany, attempts were made to bring the celebration of  Christmas in line with Nazi ideology. The Jewish origins of Jesus and the commemoration of his birth as the Jewish Messiah was troubling for Nazi racial beliefs. Between 1933 and 1945, government officials attempted to remove these aspects of Christmas from civil celebrations and concentrate on the pre-Christian aspects of the festival. Hymns and decorations were secularized. However church and private celebrations remained Christian in nature.

Nazi ideologists claimed that the Christian elements of the holiday had been superimposed upon ancient Germanic traditions. They argued that Christmas Eve

originally had nothing to do with the birth of Jesus Christ, but instead celebrated the winter solstice and the ‘rebirth of the sun’, that the swastika

was an ancient symbol of the sun, and that Santa Claus

was a Christian reinvention of the Germanic god Odin

. Accordingly, holiday posters were made to depict Odin as the “Christmas or Solstice man”, riding a white charger, sporting a thick grey beard and wearing a slouch hat, carrying a sack full of gifts. Other changes were made to the manger, which was replaced by a Christmas garden containing wooden toy deer and rabbits; Mary and Jesus were also depicted as a blonde mother and child.

The Christmas tree was also changed. The traditional names of the tree, Christbaum or Weihnachtsbaum, was renamed in the press as fir tree, light tree or Jul tree. The star on the top of the tree was sometimes replaced with a swastika, a Germanic “sun wheel” or a Sig rune, and swastika-shaped tree lights. During the height of the movement, an attempt was made to remove the association of the coming of Jesus and replace it with the coming of Hitler, referred to as the “Saviour Führer”

were also changed. The words to “Silent Night”, composed in 1818 by Franz Xaver Gruber

were changed so it made no reference to God, Christ and religion. Words were also changed to the hymn “Unto Us a Time Has Come” so as to remove references to Jesus. The modified version of the hymn was in use for several more years in post-war Germany. The most popular carol promoted by the Nazis was poet, songwriter, literary translator and author of children’s books and soldier, Hans Baumann’s

“Exalted Night of the Clear Stars” [Hohe Nacht der klaren Sterne], which replaced traditional Christian themes with Nazi racial ideologies. The carol was popular after the collapse of Nazi Germany, was regularly performed into the 1950s, and is still sometimes performed in the modern day. Hans Baumann died, age 74, in Murnau Staffelsee (Bavaria) on November 7, 1988. 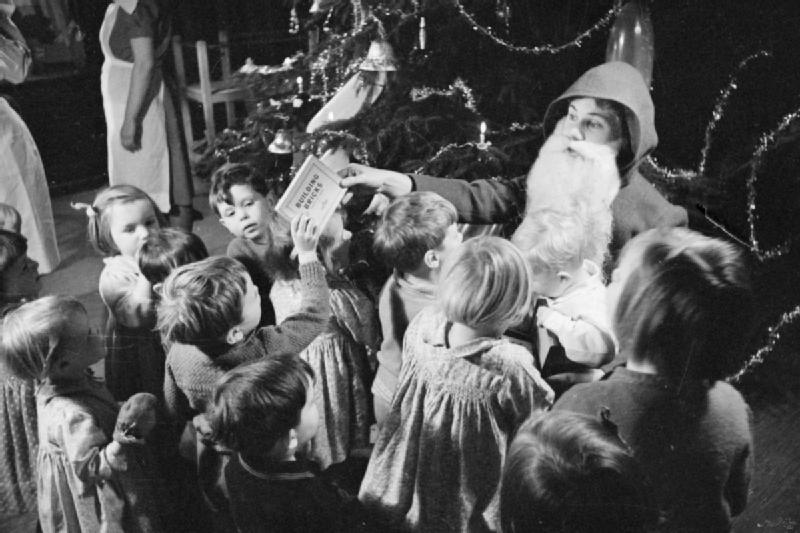 , a kind of ornate Germanic candlestick

, some of which were made at Dachau concentration camp.

Housewives were prompted to bake biscuits in the shape of birds, wheels and swastikas for their children 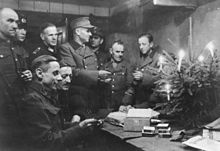 By 1944 the movement to remove Christian influences from Christmas lessened as the government concentrated more on the war effort.[ In 1944 civil celebrations of Christmas marked the festival as a day of remembrance for Germany’s war dead.

While most Germans embraced the Nazi’s rebranding of Christmas, at time it was reported that there was hostility by a minority. Files from the National Socialist Women’s League

reported, “that tensions flared when propagandists pressed too hard to sideline religious observance, leading to “much doubt and discontent.'”] The clergy were among those opposed the redefining of Christmas. Reports say that in Düsseldorf the clergy used Christmas to promote women’s clubs and encourage membership; the Catholic clergy threatened any woman who joined the National Socialist Women’s League with excommunication; and some religious women boycotted Christmas events organised by National Socialist Women’s League. 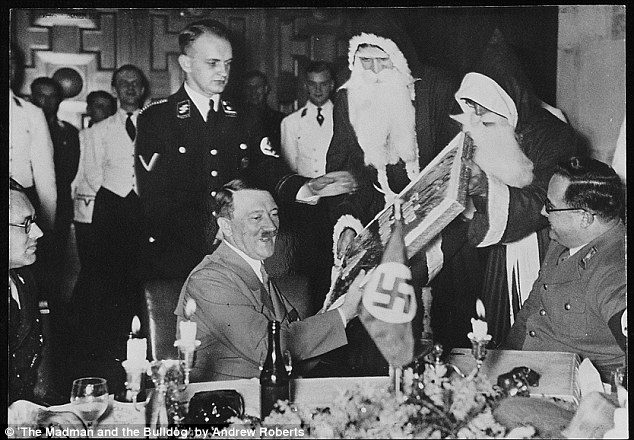