December 1944, Adolf Hitler attempted to split the Allied armies in northwest Europe by means of a surprise blitzkrieg thrust through the Ardennes to Antwerp. Caught off-guard, American units fought desperate battles to stem the German advance at St.-Vith, Elsenborn Ridge, Houffalize and Bastogne. As the Germans, under command of SS Standartenführer Peiper, Joachim “Jochen”

drove deeper into the Ardennes in an attempt to secure vital bridgeheads, the Allied line took on the appearance of a large bulge, giving rise to the battle’s name. Lieutenant General George Smith Patton’s

successful maneuvering of the Third Army

to Bastogne proved vital to the Allied defense, leading to the neutralization of the German counteroffensive despite heavy casualties.

Its objective was to split the Allied armies by means of a surprise blitzkrieg thrust through the Ardennes to Antwerp, marking a repeat of what the Germans had done three times previously–in September 1870, August 1914, and May 1940. Despite Germany’s historical penchant for mounting counteroffensives when things looked darkest, the Allies’ leadership miscalculated and left the Ardennes lightly defended by only two inexperienced and two battered American divisions.

On December 16, three German armies (more than a quarter-million troops) under command of General of the Panzertruppen Heinrich Diepold Georg Freiherr von Lüttwitz,

launched the deadliest and most desperate battle of the war in the west in the poorly roaded, rugged, heavily forested Ardennes. The once-quiet region became bedlam as American units were caught flat-footed and fought desperate battles to stem the German advance at St.-Vith, Elsenborn Ridge, Houffalize and, later, Bastogne, which was defended by the 101st Airborne Division

, the Screaming Eagles under command of Brigadier General Anthony McAuliffe

who was in the USA during the attack. The inexperienced U.S. 106th Division

was nearly annihilated, but even in defeat helped buy time for Brigadier General Bruce Coper Clarke’s

brilliant defense of St.-Vith. As the German armies drove deeper into the Ardennes in an attempt to secure vital bridgeheads west of the River Meuse quickly, the line defining the Allied front took on the appearance of a large protrusion or bulge, the name by which the battle would forever be known. At the end of the war, the106th Division had seen 63 days of combat. It had suffered 417 KIA, 1,278 WIA, and 53 died of wounds. It lost 6,697 personnel taken prisoner. Of that total, 6,500 POWs were eventually returned to American military control after being released at war’s end. The remainder were listed MIA.

There is only one possibility to save the encircled U.S.A. troops from total annihilation: that is the honorable surrender of the encircled town. In order to think it over a term of two hours will be granted beginning with the presentation of this note. If this proposal should be rejected one German Artillery Corps and six heavy A. Battalions are ready to annihilate the U.S.A. troops in and near Bastogne. The order for firing will be given immediately after this two hours term. All the serious civilian losses caused by this artillery fire would not correspond with the well-known American humanity. The German Commander Anthony McAuliffe’s reply advised by 101 Airborne colonel, Harry Kinnard,

“Nuts ” was explained to the German negotiators as the equivalent of “go to hell!”

Stunned, once the Germans understand the message, shelling resumes, with no progress however. The next day, the weather clears up, allowing General George Smith Patton, headquartered in the city of Luxembourg, to coordinate the parachuting of food, medicine and weapons for the remaining 101st Airborne Division men.. 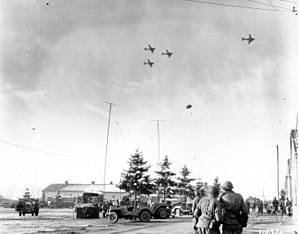 A crucial German shortage of fuel and the gallantry of American troops fighting in the frozen forests of the Ardennes proved fatal to Hitler’s ambition to snatch, if not victory, at least a draw with the Allies in the west. Lieutenant General George S. Patton’s remarkable feat of turning the Third Army ninety degrees from Lorraine to relieve the besieged town of Bastogne was the key to thwarting the German counteroffensive. The Battle of the Bulge was the costliest action ever fought by the U.S. Army, which suffered over 100,000 casualties.