During his years with Hitler, Gerhard Michael Engel

kept the diary in the form of six notebooks. With the unconditional surrender of Germany, he was held in American captivity and released in December 1947. After the war, he added material to shed further light on certain events, military and political decisions and Hitler’s attitude to particular problems. His diary covers the decision-making process behind crucial military actions, including the annexation of Austria, the invasion of Czechoslovakia, and the war against Russia. Hitler had many different adjutants for a variety of different functions. His chief adjutant was SA Obergruppenfuhrer, Wilhelm Brückner, here in 1926

died age 69, on 18-08-1954, in Herbsdorf and who held this title from around 1922-1940. He was dismissed over a very petty incident involving another adjutant, Max Wünsche. Brückner was replaced by Hitler’s other main adjutants SS Obergruppenfuhrer, Julius Schaub. Schaub acted as Hitler Factotum in just about every aspect of his private life, he burnt Hitler’s privat administration in Berchtesgaden. All adjutant technically were under his control  although that was not always the case. SS Ordenance Officers and SS Adjutants were, Ludwig Bahls,

1943-44, Darges died very old age of 96, on 25-10-2009. Shortly before his death, Darges stated that he found Hitler to be a “genius” and that “I served him and would do it all again now. On 18-07-1944, during a strategy conference in the Wolfsschanze, a fly began buzzing around the room, allegedly landing on Hitler’s shoulder and on the surface of a map several times. Irritated, Hitler ordered Darges to dispatch the nuisance. Darges suggested that, as it was an airborne pest, the job should go to the Luftwaffe adjutant, Nicolaus von Below

He died age 76, on 24-07-1983, in Dermold. Enraged, Hitler dismissed Darges on the spot and had him banished to the Eastern Front. Another version of this story claims Darges was merely snickering as Hitler looked up from the map. Yet another version of Darges’ dismissal and banishment by Hitler involves his refusal to marry Eva Braun’s  (see parents Braun) sister Gretl Braun, who married Hitler’s adjutant Hermann Fegelein , who was pregnant at the moment, The drunken Fegelein was executed age 38, on 29-04-1945 in the Führerbunker garden. Last adjutant was Otto Günsche  1944-45, he would bring the bodies of Hitler and Eva up to the garden and burn them with petrol, after their suicide. There were military adjutants such as Von Below Hitler’s Luftwaffe Adjutant. Rudolf Schmundt, his army and chief military adjutant, Karl Jesco von Puttkamer, Naval adjutant. Albert Bormann, 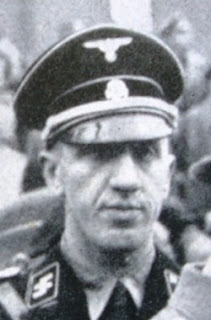