The 1941 February Strike, also known as ‘The Strike of February 1941’, was a general strike organized during World War II in the Netherlands against the anti-Jewish measures and activities of the Nazis. Its direct causes were the pogroms held by the Germans in the Jewish neighborhood of Amsterdam. The strike started on 25 February and was largely struck down the next day. It was the first direct action undertaken against the anti-Jewish measures of the Nazis in occupied Europe, and it was carried out by non-Jews. 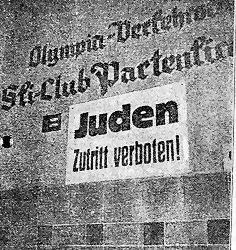 The Netherlands surrendered to Nazi Germany in May 1940, and the first anti-Jewish measures (the barring of Jews from the air-raid defence services) began in June 1940. These culminated in November 1940 in the removal of all Jews from public positions, including universities, which led directly to student protests in Leiden and elsewhere. At the same time, there was an increasing feeling of unrest among workers in Amsterdam, especially the workers at the shipyards in Amsterdam North, who were threatened with forced labour in Germany. 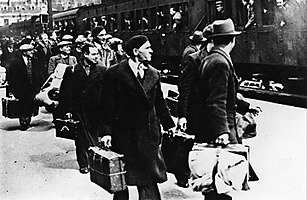 and its street fighting arm, the WA (“Weerbaarheidsafdeling“ – defense section), were involved in a series of provocations in Jewish neighborhoods in Amsterdam. This eventually led to a series of street battles between the WA and Jewish self-defence groups and their supporters, culminating in a pitched battle on 11 February 1941 on the Waterlooplein in which WA member Hendrik Koot was badly wounded. He died of his injuries on 14 February 1941. 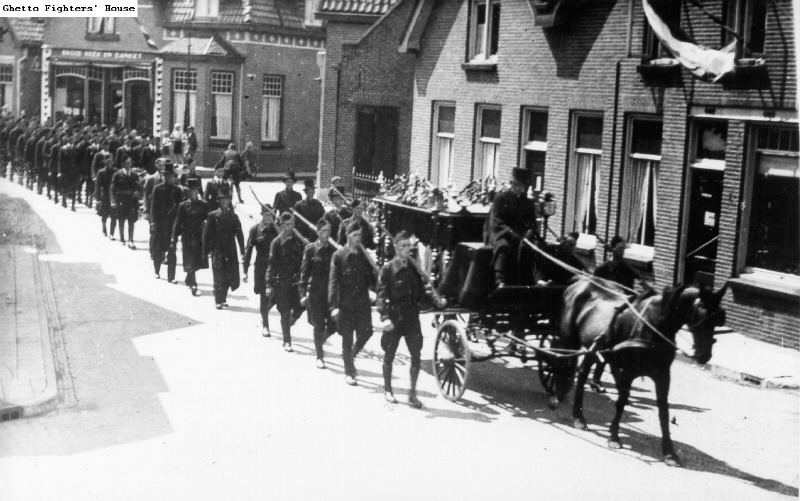 On 12 February 1941, German soldiers, assisted by Dutch police, encircled the old Jewish neighbourhood and cordoned it off from the rest of the city by putting up barbed wire, opening bridges and putting in police checkpoints. This neighborhood was now forbidden for non-Jews.

On 19 February, the German Grüne Polizei

stormed into the Koco ice cream salon in the Van Woustraat. In the fight that ensued, several police officers were wounded. Revenge for this and other fights came in the weekend of 22–23 February, when a large scale pogrom was undertaken by the Germans. 425 Jewish men, age 20-35 were taken hostage and imprisoned in Kamp Schoorl and eventually sent to the Buchenwald and Mauthausen concentration camps, where most of them died within the year. Out of 425, only two survived.

Following this pogrom, on 24 February, an open air meeting was held on the Noordermarkt to organise a strike to protest against the pogrom as well as the forced labour in Germany. The Communist Party of the Netherlands, made illegal by the Germans, printed and spread a call to strike throughout the city the next morning. The first to strike were the city’s tram drivers, followed by other city services as well as companies like De Bijenkorf and schools. Though the Germans immediately took measures to suppress the strike, which had grown spontaneously as other workers followed the example of the tram drivers, it still spread to other areas, including Zaanstad, Kennemerland in the west, Bussum, Hilversum and Utrecht in the east and the south. The strike did not last long. By 27 February, much of it had been suppressed by the German police. Although ultimately unsuccessful, it was significant in that it was the first direct action against the Nazis’ treatment of Jews in Europe.

The next strike would be student strikes in November 1941, and after that the large April–May strikes in 1943 that ushered in a period of armed covert resistance on a national scale.

In the rest of Nazi-occupied Europe the Greeks in April of 1942, the Danes starting in the summer of 1943, the Luxembourgers in August of 1942, the Belgians in May of 1941, the Norwegians in September of 1941 and the North French miners in May–June 1941 also went on strike, but not as early as the Dutch strike of February 1941.

Karl Chmielewski a commander of the Dutch, Herzogenbusch concentration camp,